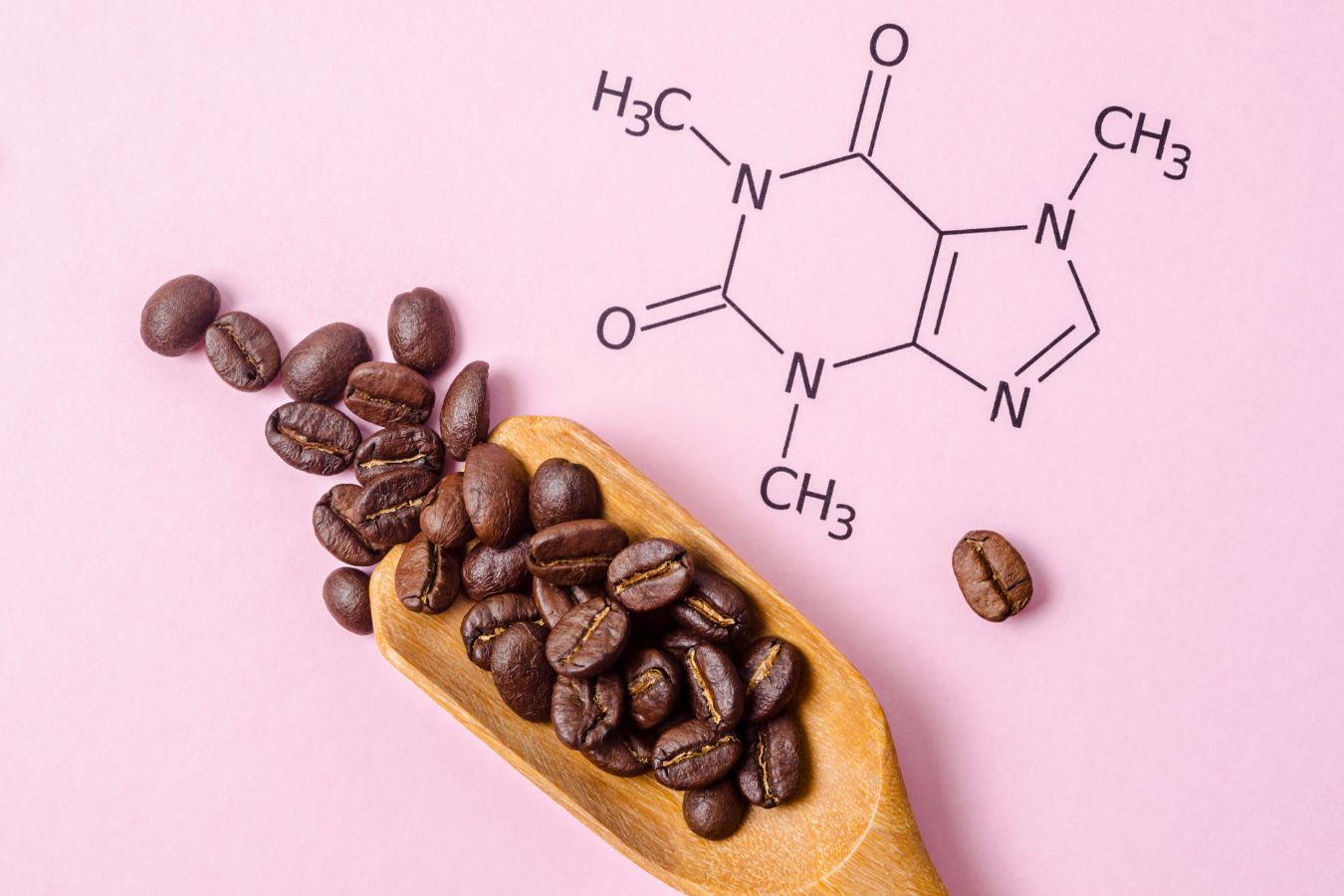 Chemical Composition Of Coffee Beans? This article presents an overview of the chemical components of coffee such as carbohydrates, proteins, lipids, Caffeine, acids, aromatics, and minerals. The above primary groups of substances are present in all varieties. However, depending on the type of coffee and the growing conditions, the chemical composition of coffee can change.

Each coffee you brew will have a different chemical composition and provide a different sensory experience. However, they all have the exact origin, are all fruits from the Coffea tree, have similar anatomy, and are processed by some of the same methods.

There are many ways to organize and classify the compounds present in coffee. Some studies sorted by taste effects, physiology, effects before and after roasting, growing and processing effects, differences in plant varieties, .. and many others. In the area of ​​aromas and flavors alone, Flament lists 300 chemicals that contribute to green coffee beans and more than 850 substances after roasting.

According to Wikipedia, he recorded 16 significant categories including compounds related to aroma and taste.

Therefore, this stub article can only detail some of the ingredients of coffee such as carbohydrates, proteins, lipids, acids, aromatics, and minerals.. to give you a basis for further studies.

The Chemical Compounds of Organic Substances in Coffee

Chemically, coffee is complex, and its exact composition depends on many factors such as variety, roasting, grinding, and brewing conditions. The variability of coffee is highlighted by a recent study that analyzed the chemical composition of coffee beans, including carbohydrates, fats, proteins, organic acids, Caffeine, and bitter substances (tannins).

It contains 2-3% caffeine, 3-5% tannin, 13% protein and 10–15% fixed fat. In the seeds, Caffeine is present as a salt of chlorogenic acid (CGA). In addition, it also contains many aromatic substances and minerals – according to intechopen.com.

In green coffee, carbohydrates (hydrated carbon molecules with a complex structure) make up about 40-50% of the chemical composition of coffee, including both soluble and insoluble parts.

The main low-molecular-weight carbohydrate (sugar) in green coffee is Sucrose. Most documented values ​​for sucrose range from 2% to 5% for Robusta beans and 5% to 8.5% for Arabica beans(summarized by Clifford 1985).

During roasting, these carbohydrates react with amino acids to produce structurally complex molecules called melanoidin. Their exact composition is unknown, but these macromolecular compounds are generally brown and contribute to the dark color of coffee bean. Several studies indicate that melanoidin exhibits various biological activities, including antibacterial, antioxidant, and ability to influence gut microbiota.

The protein content in coffee is not high but plays a vital role in helping to shape the flavor of coffee during roasting through Maillard’s reaction with sugars in coffee. Qualitative methods found that there are primary amino acids such as cysteine, alanine, phenylalanine, histidine, leucine, lysine, serine…

These amino acids are rarely found in their free form; they are released and react with each other or interact with the aroma and taste substances of roasted coffee. Among the above amino acids, the most notable are the acids.

Sulfur-containing amines such as cysteine, methionine, and proline … contribute to the characteristic aroma of coffee after roasting. In particular, methionine and proline have the effect of reducing the oxidation of aromatic substances, making roasted coffee retain its flavor when stored.

These organic acids contribute to the formation of organic acids. So Acidity (Acidity) is characteristic of coffee. Depending on the variety of the coffee, the composition and the Acidity of coffee are constantly changing during processing, mostly during fermentation and roasting. Some acids will be significantly lost; others will be regenerated.

During roasting, acid degradation products often participate in the Maillard reaction and give rise to various compounds, including very bitter and brownish-tasting melanoidin. So, the darker the roast, in general, the more painful the beans will be.

Lipids, or simply fat, which play an essential role in the quality of your coffee, are mainly composed of triacylglycerols, sterols, and tocopherols (vitamin E). The lipid content in coffee varies depending on the species.

Typically Arabica contains more lipids than its cousin Robusta, averaging 15-17% and 10-11.5%, respectively. However, only a tiny percentage of the oil exists in the waxy form that coats the coffee beans (7-8%), while the majority is distributed in the endosperm (about 90%) – you can See details of fats in coffee.

It should be noted that depending on the preparation method used, the lipid content obtained in the cup will be different. Studies have shown that filter coffee brewing methods ( drip coffee with filter paper) retain only 7 milligrams of lipids, while boiling or espresso processes can contain between 60 and 160 milligrams of lipids per cup. (150 ml). Since most of the coffee flavor is dissolved by the fatty acids, drip coffee has a “cleaner feel” than unfiltered coffee – How to Make Coffee, Lani Kingston.

Coffee beans contain several alkaloids (an organic compound containing at least one nitrogen atom), including Caffeine, Putrescine, Theophylline, and Trigonelline. Of these, Caffeine is found in both coffee and tea, but Trigonelline found only in coffee are the two main alkaloids known as stimulants in humans and for which we love coffee.

Caffeine (also known as trimethylxanthine), an alkaloid, may be the reason you love drinking coffee. Alkaloids have a CNS stimulant effect that increases alertness; they have a bitter taste in their pure form. Caffeine contributes to the overall strength, and bitterness is characteristic of coffee. Depending on the species and variety, Caffeine makes up between 0.6 and 4% of the grain weight.

Caffeine in coffee fruit contributes only about 10% bitter ( bitterness ) of coffee, much of the rest is due Trigonelline cause ( The Coffee Roasters – Scott Rao – 2014 )

In coffee berries, Caffeine acts as an insect repellent. The average caffeine content in Robusta coffee is higher than that in Arabica coffee, so its resistance to pests is also better. Although it is recognized by many studies as benign and has no adverse effects on health, the dosage of Caffeine is also different for each person depending on the location and the level of sensitivity…

Trigonelline is another alkaloid found in coffee beans at slightly lower concentrations than Caffeine. It starts to decompose at 160°C, so during roasting (hotter than 200°C), more than half of the Trigonelline is degraded and produces several compounds, including nicotinic acid known as vitamins. When entering the extract, B3, the remainder of the Trigonelline creates sweet, caramel, and earthy aromas.

The trigonelline content in a cup of coffee ranges from 40 to 110 mg. This compound has been shown to exhibit various biological activities, including hypoglycemic, neuroprotective and antibacterial activities – edwinvanbloois

The components of this section do not share a common chemical property but the physical property of being volatile. This is responsible for most of the coffee’s aroma and usually comes from reactions during the roasting process, but storage can also affect them.

Studying all of these compounds is complex and ongoing work, as more than 1000 volatile compounds are found in a typical cup of coffee. They’re volatile by name and nature – they tend to fly away before it’s time to measure them!

Today we have found more than 800 odor compounds in coffee, 150 of which make up the central combination that we call “coffee aroma,” – according to coffee research.

In coffee, the content of aromatic substances is minimal; it is formed and accumulated in the beans. Accumulation is subject to many factors such as soil, climate, and especially the type of coffee.

The collection of aromatic substances in the bean in particular and the structure of coffee flavor is greatly influenced by altitude, so the higher the coffee varieties are grown, the better the quality of the beans (see also the influence of size high on coffee taste ).

Complex aromatic substances include many constituent molecules such as acids, aldehydes, ketones, alcohols, phenols, and esters… The aromatic substances of coffee are readily volatile, and transformed, and lead to coffee loss of aroma. It should be kept in sealed packaging and consumed quickly.

It is impossible not to mention the minimal amount of minerals in coffee, including about 3-5%, mainly Potassium, Nitrogen, Magnesium, Phosphorus, and Chlorine. There are also aluminum, iron, copper, and sulfur substances, which only exist in traces. These substances adversely affect the aroma of coffee. The higher the coffee quality, the lower the minerals, and vice versa.

Finally, the chemistry of coffee is complex because it contains hundreds of different compounds. Furthermore, the chemical composition depends on many factors, and the exact recipe of a cup of coffee is therefore difficult to establish.

Although it is clear that coffee contains various bioactive compounds, its complex chemistry complicates a full assessment of its physiological properties. This article is for background purposes only, to give you a better foundation for in-depth research.