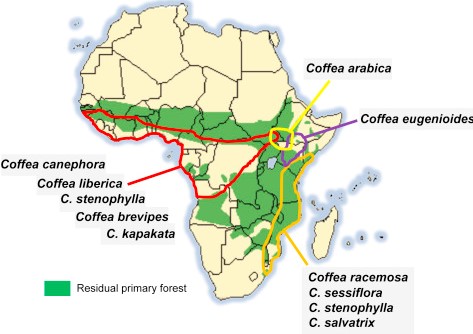 Mundo Novo coffee in Vietnam – Helena., JSC: Mundo Novo coffee results from natural crossbreeding between  Bourbon and  Typica varieties with good vitality and yield, high quality but susceptible to diseases on coffee trees. Get high. Mundo Novo is widely grown in South America but is rare in Central America and the Caribbean.

Mundo Novo results from a natural cross between  Bourbon and Typica varieties found in Mineiros do Tiete, Sao Paulo, Brazil. The seeds of the coffee tree were initially grown in the city of  Novo Mundo, now known as Urupês, where selection created the  Mundo Novo variety. The variety was discovered in 1943.

The first selections of  Mundo Novo in Brazil were completed between 1943 and 1952. The variety has been distributed to farmers in Brazil since 1952. New appointments have been made by the IAC (  Instituto ). Agronomic de Campinas).  ) was released in Brazil starting in 1977. The variety is of commercial importance in Brazil and other South American countries, including Peru, rarely in Central America.

Mundo Novo first came to Costa Rica in 1952. However, it was not widely accepted because farmers did not like its too-tall shape. In addition, it was introduced to Guatemala in 1963-64 and Honduras in 1974. In Africa, it is also found in Malawi.

Enjoy a smooth, chocolatey, and rich cup of Mundo Novo. This coffee is quite pliable, and regardless of the brewing technique, it still has a great taste.

The Mundo Novo variety was initially reported in 1940 as a natural hybrid between Red Bourbon and Typica from Sumatra. This hardy variety is popular in the farm’s sub-regions, and it regularly competes in the Brazilian Cup of Excellence.

What is Typica Coffee?

Coffee Basics You Should Know