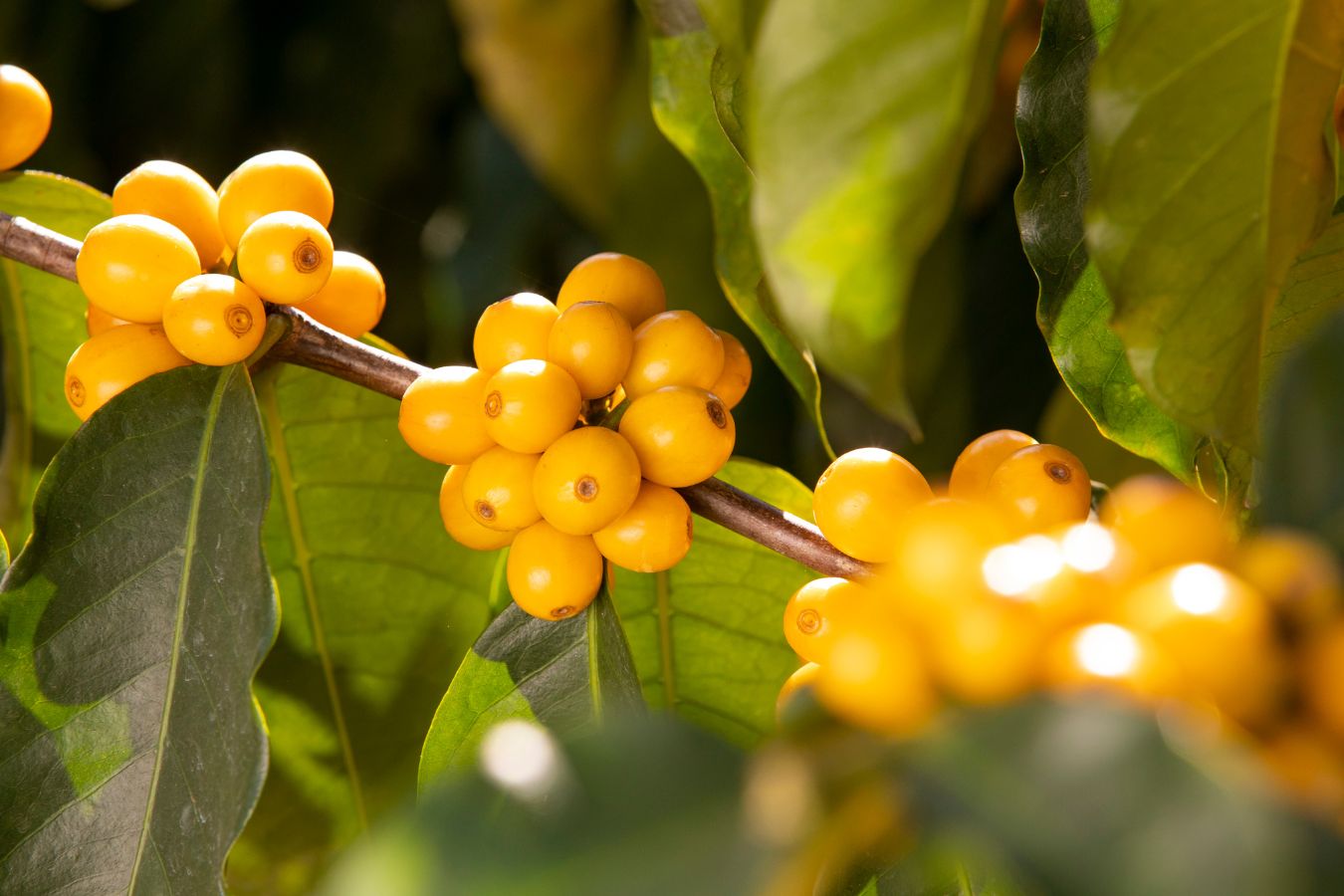 Bourbon Coffee – Origin & Biological Characteristics: Bourbon is one genetically essential C. arabica coffee variety worldwide. Along with its brother Typica, most other coffees have been bred. The high-quality correlation of these two varieties has served as a measure of quality throughout the history of the coffee industry. But some mutations have given Bourbon coffee a 20-30% higher yield than the Typica brothers. The following infographic will show the main characteristics of the Bourbon Coffee variety.

Because of its high yield, Bourbon gained popularity quickly after it was first cultivated on the island of Bourbon, and now it is growing worldwide. Beans from the Bourbon varieties are rich in sweetness and have complex and delicate flavors with high acidity.

Like most coffees, Bourbon Trees can have different flavors depending on the coffee they are grown in. While most coffee cherries are red, some Bourbon trees can produce pink, yellow, or orange cherries – characteristics present only in the Bourbon variety.

According to WCR, Bourbon coffee trees The French got from Yemen to Bourbon Island (now La Réunion Island in the Indian Ocean) three times, in 1708, 1715, and 1718, of which only a handful of seedlings survived on the latter two occasions until, In the mid-19th century, the Bourbon coffee tree did not leave the island.

French missionaries, known as Spiritans, also played an essential role in popularizing Bourbon coffee in Africa. From the first Bourbon trees planted in La-Reunion, they were brought by missionaries to Zanzibar in 1859, then from Zanzibar to Bagamoyo (coastal Tanzania) and St. Augustine (Kikuyu, Kenya), Bura (Taita Hills, Kenya), thereby marking the presence of Bourbon throughout Africa (according to worldcoffeeresearch.org).

Seedlings from St. Augustine were used for planting in the highlands of Kenya, while Bagamoyo seedlings were found on plantations in the Kilimanjaro region of Tanzania.

Since 1930, a research station established in Lyamungo near Mosh, Tanzania, has begun a coffee breeding program based on a mass selection of Bourbon varieties in Bagamoyo. This research station was the forerunner of today’s Tanzania Coffee Research Institute (TaCRI).

Today, coffee production in Latin America is still based on many cultivars developed from Typica and Bourbon. Bourbon first appeared in the Americas in 1860 in southern Brazil. From here, it spread north and into Central America.

Today, of the 40% of world coffee production that Brazil contributes, 97.55% of coffee varieties originate from Typica and Bourbon. The Bourbon itself has undergone various mutations and variations since spreading. Some are artificial to improve yields over the original Bourbon coffee. Here are some generations of Bourbon coffee:

The Caturra coffee plant is a naturally dwarf (meaning short stem) mutant of Bourbon first found in Brazil in 1937. Caturra is more productive and disease resistant than its mother, Bourbon. Caturra is currently popular in Colombia, Costa Rica, and Nicaragua, although Brazil still grows a decent amount. While the flavor quality is good, Caturra is generally considered lower than Bourbon.

Also, a “dwarf” mutant than Bourbon coffee. Pacas were discovered in 1949 on a farm owned by the Pacas family in the Santa Ana region of El Salvador. By 1960, the Salvadoran Institute for Coffee Research (ISIC) had begun a genealogical selection program for Pacas. Pacas accounts for about 25% of the country’s coffee production (Pasca has also been grown in Honduras since 1974).

According to the Salvadoran Institute of Coffee Research (ISIC), the name “Tekisic” comes from the Nahuatl word “tekiti,” a word meaning “work.” There has been a lot of effort in breeding Tekisic from Bourbon coffee trees, where ISIC has spent nearly 30 years performing individual selections (meaning that several coffee plants are selected based on performance, the seeds from these plants are reassembled into a new generation, and then the process was repeated), starting in 1949 and culminating with its release in 1977.

Like Caturra and Pacas, Villa Sarchi (also known as La Luisa or Villalobos Bourbon) is also a natural mutation of Bourbon coffee. This species was discovered in Costa Rica in the 1950s (or 1960s) in the northwestern region of Alajuela province and was subsequently pedigree selection (selection of individual trees over successive generations). It is not widely grown outside of Costa Rica, although it was introduced into Honduras by IHCAFE in 1974.

Cultivated by the Kenyan government in the 1930s to select a high quality, high yielding, and drought-tolerant coffee variety, Scott Laboratories (from Kenya) set two seedlings, SL28 and SL34 (both of Bourbon origin). Although SL28 does not have a high yield or disease resistance, its seeds are high quality. Some individuals recognize SL28 as having qualities, unlike any other coffee in the world (Jessica Easto, Craft Coffee). SL34 has a slightly higher yield than SL28, although it is still a high-quality coffee.

Arabica Bourbon Coffee And How Is It Grown In Vietnam?