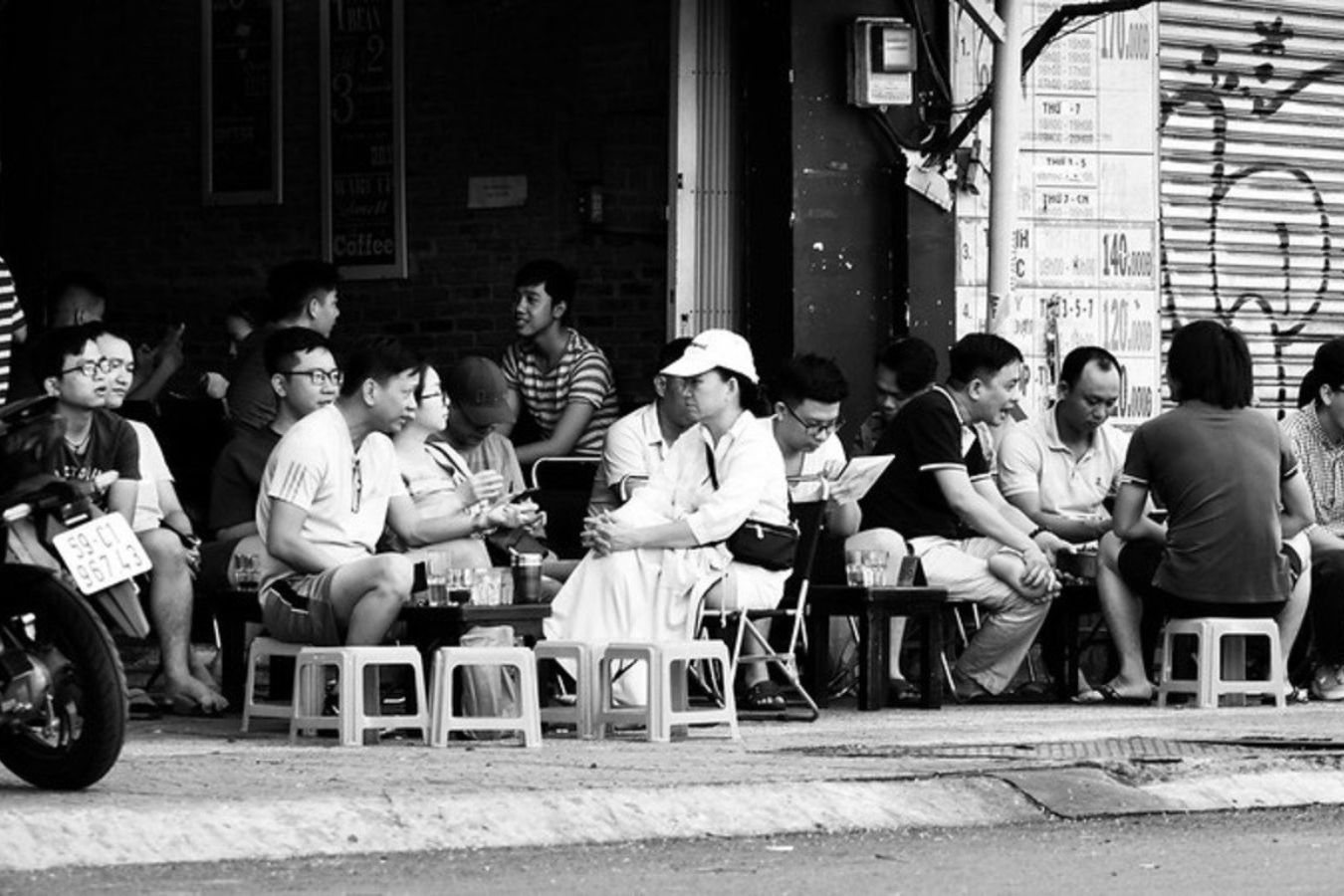 Is it possible to get good coffee on the side of the road?

Sidewalk coffee is a cultural “specialty” of Kinh Ky, born and developed to integrate with the Vietnamese’s long-standing tea-drinking Vietnamese culture.

Curb coffee is coffee offered on clean sidewalks by the lake, in the street, on shaded streets, scarlet phoenix wings in summer, season Autumn is fragrant with the aroma of porcelain flowers, gently caressing the wind with Tran Le Xuan’s ao dai’s modern ladies’ skirts.

People from the city come to sidewalk coffee for a place to sit and sip a cup of bitter, sweet, fleshy, aromatic coffee while watching the flow of life on the street with so many people passing by and listening to the noises of the city.

Every day, every hour, like every beat, the breath of life, the familiar sounds of life, from the Italian language to the sound of motorbike engines to the sound of selling to pho, sticky rice, tea… People also come to appreciate each drop of coffee, listen to the depth of coffee falling in the cup to count each drop of time as if it were a remembrance song, and then create poetic and profound themes.

However, some people visit sidewalk cafes to listen to discussions, “cheat” on friends and learn new information, such as the reasons for living in life.

In the culture of sidewalk coffee, this is a characteristic of “marketers”

For thousands of years, coffee drinkers and Vietnamese people have been influenced by the wet rice farming tradition. As a result, sidewalk coffee is not truly popular coffee, but rather a kind of coffee that does not differentiate between high and low consumers, rich and poor, and just coming to sidewalk coffee implies going to shops.

A “heaven” of delicate and modest culinary culture There is no glitz, frivolity, or pretension here, only sincerity and empathy.

All diners arrive to drink coffee according to their preferences, based on their “gut” feelings of enjoyment and sharing. Coffee is sometimes just an excuse for them to sit on the sidewalk and communicate, discuss, confide in, or comment on matters that they care about.

Vietnam’s coffee is sometimes just an excuse for them to sit on the sidewalk and communicate, discuss, confide in, or comment on matters that they care about.

It’s not just coffee on the sidewalk!

Vietnamese people, in general, have multi-regional and multi-regional cultures within them; therefore, their stories are frequently political, economic, cultural, and sporting stories that span continents. It’s quick, concise, and very… industrial when it comes to business stories. If multiple groups of writers, intellectuals, and students converse on the sidelines, the story becomes much more intriguing and spectacular.

All sorts of concerns, remarks, and viewpoints are expressed. One of them is frequently pleased to read a few delicate, lyrical phrases… Many people’s souls are captured by street coffee, whether by mistake or on purpose.

This explains why sidewalk cafes are different from pubs, beer, and wine bars, even though they are on a sidewalk and do not and never have quarrels, noisily with each other.

This is a real thing. It’s not that the sidewalk cafes have only modest plastic or wooden chairs or that the menu consists solely of hot and iced coffee, a few peanut chocolates, and a few scented cigarettes…

Successful merchants, overseas Vietnamese, authorities, manual laborers, workers, and shoe polishers all have the same position and menu as the other customers. All employees are treated equally, and consumers are respected. And what about this country’s culinary culture, which is already quite excellent, rather than the luxurious, pricey, noisy, and wasteful restaurants that are the culture?

According to academics, language is a means for expressing one’s thoughts, and the Vietnamese language, in this case, has a mindset that is already influenced by coffee culture.

Vietnamese people drink coffee usually firm rather than diluted, like in other parts of the world. Perhaps the geographical climate and the traditional custom of drinking solid tea have influenced the way people consume solid coffee. “real” Vietnamese people rarely use light coffee. This partly results in a robust and fierce attitude, but it also results in a controlled demeanor.

Sidewalk coffee can only be found on streets with sidewalks in terms of appearance. As a result, sidewalk coffee is primarily developed in large cities, including Hanoi, Saigon, and Nha Trang.

However, sidewalk coffee culture can only be found in regions where traditional and modern cultures have collided, with cultural subjects who know how to appreciate coffee and see life’s true and beautiful meaning.