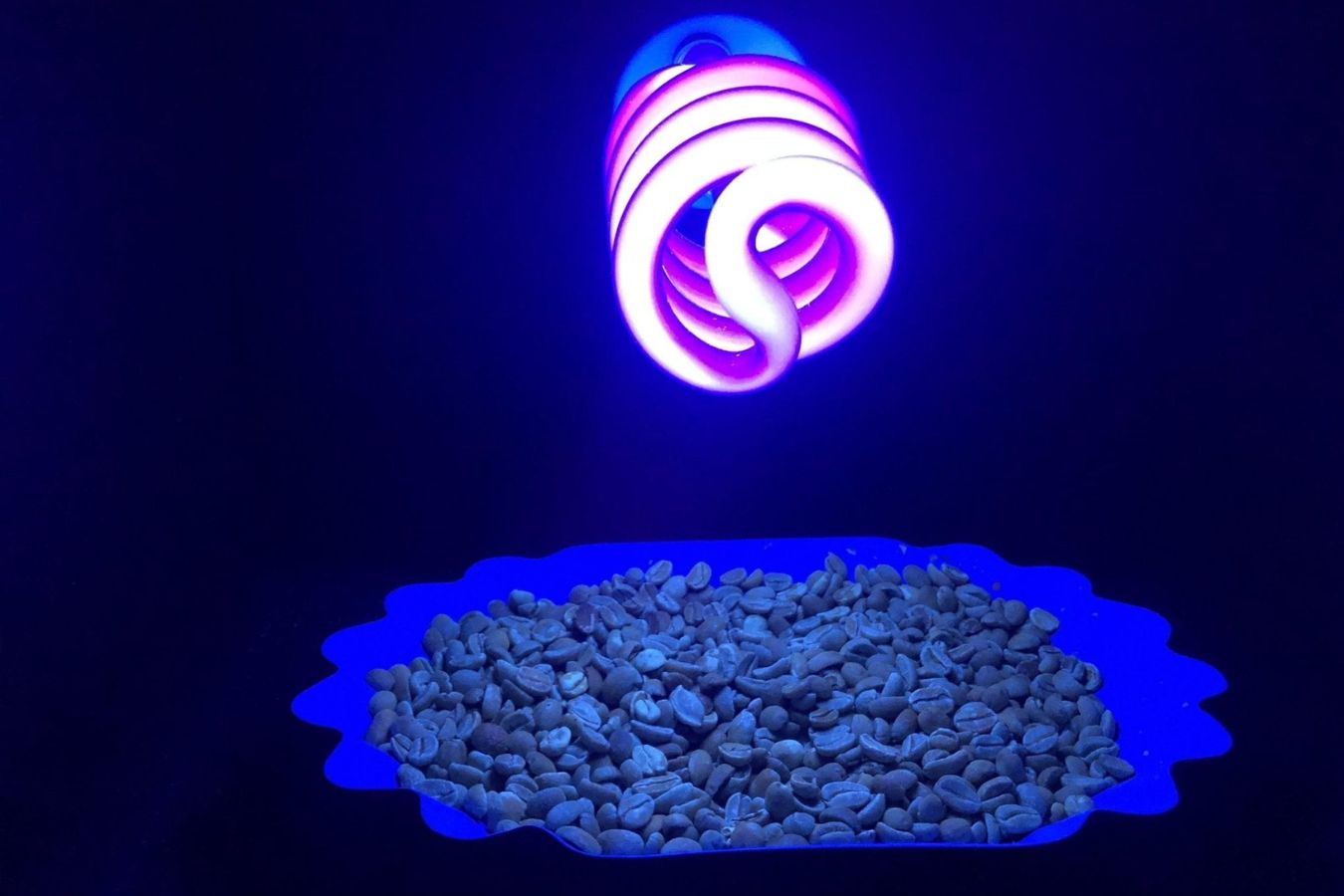 However, an ultraviolet lamp costs only a few hundred thousand dollars to evaluate the luminous particles under UV light. With so many unknowns, this technique appeals to exploration.

This topic will be simple if you recall the concepts of visible light, ultraviolet light, and fluorescence from Physics 12. (and skip this part). On the contrary, you can begin to grasp some of the fundamentals in just a few minutes!

To begin with, “light” is a popular term for electromagnetic radiations with wavelengths in the visible range of the spectrum (i.e., from roughly 380nm to 760nm), often known as the visible region.

This translates to a frequency range of 400-790 THz in terms of frequencies. The maximal sensitivity of a light-adapted eye is about 555 nm (540 THz), which corresponds to the blue area of the optical spectrum – which is why we look so lovely in green.

As a result, humans can only sense a portion of the electromagnetic spectrum, called the “visible light spectrum,” somewhat confusingly. The rest, such as infrared at long wavelengths (greater than 760nm) and UV at short wavelengths (more than 380nm), are observable to other creatures. Except in the case of UV light, humans require specific equipment to comprehend it. Phosphor, for example, can alert us to the presence of ultraviolet light by fluorescence.

Fluorescence is the concept behind those unpleasant, noisy tube lights (fluorescent bulbs). The electrical discharge between the two electrodes produces ultraviolet (UV) light with a short wavelength that is invisible.

This UV light then passes through a coating on the bulb (often a phosphor), which absorbs some of the UV’s energy and attenuates the high-frequency magnetic waves before re-radiating them at low frequencies. Additional information: visible light.

Blacklights are created the same way as incandescent and fluorescent lamps, but the glass housing and coating are different materials. This means that most light released is UV, with only a tiny amount of visible light near the UV spectrum (indigo and violet). As a result, ultraviolet rays are typically dark blue or purple.

So now we know what UV light is and why some coffee beans can “glow” when exposed to it. But the most pressing question at the moment is: why are low-quality (or allegedly low-quality) coffee beans able to glow under UV light? And what can we conclude with these beans – how we classify coffee under UV light is determined by this. But first, use an ultraviolet lamp to sift coffee.

First, you’ll need an ultraviolet light (which may be easily acquired online), a dark place, and the coffee batch to be tested. After that, shine the light on your coffee sample right away. Slowly move the light up and down until the luminous coffee beans are visible.

Different types of coffee will appear differently in the light, but within a batch, everything will look the same; only the defective (or troublesome) beans will glow to varying degrees. Pick up any entirely luminescent particles, as well as any that are speckled, dotted, or partially luminescent, and sort them out separately (we’ll break them down later).

Turn the lights back on and analyze what you have after making sure there are no anomalies in the batch of seeds and that you have selected all of the poor seeds. Tiny, underdeveloped seeds, perforated seeds, discolored seeds, and chipped or shattered seeds are common visual abnormalities.

The concept of luminescence in coffee is why this post took so long to write. However, since a roaster mentioned the luminescence of coffee beans to our staff at Comedy Coffee, I’ve done a lot of research. There are relatively few scientific explanations for this procedure. The most noticeable things on the internet are buying a UV lamp or identifying lousy coffee with a UV light (it feels like we are looking for dark matter) in the beans of coffee.

I discovered while investigating this topic that this technique has been around for a long time! UV light has been used to evaluate coffee quality for decades worldwide, yet most coffee purchasers lack a firm technical foundation. On the other hand, this was established many years ago.

In 1981, the Kenyan Coffee Board produced a manual on UV grading. Meanwhile, for over a decade, the Daterra farm in Brazil has used UV grading for green coffee beans. In June 1975, the East African Industrial Research Organization in Nairobi (Kenya) presented a paper at the 7th International Scientific Conference on Coffee in Hamburg, demonstrating that ultraviolet lamps can detect “stinker” seeds, which are seeds that have been over-fermented during wet processing.

The effect of coffee processing on its brightness

However, based on Christopher Feran’s research, there are some physical facts that luminous quality green beans, whatever the reason, tend to:

On the other hand, UV grading becomes erroneous after a lengthy storage period since the fluorescence of coffee beans dramatically decreases with time. Because neutral lipid hydrolysis increases the concentration of free fatty acids, which will bind to fluorescent chemicals, phospholipids steadily decrease when coffee is held for an extended period. So for fresh coffee, the UV rating is the most accurate — the fresher, the better.

When coffee dries too quickly (because of excessive heat), it kills the embryo and potentially the endosperm tissue first. Then, many intracellular chemicals transfer from the inside to the outside of the interstitial space: cell wall and plasma membrane (cellulose septum). Microbial and enzymatic activity may also play a role in highly humid settings, increasing exposure to air and resulting in oxidation and UV luminosity. Fermentation of Cocoa and Coffee, p.386).

Note: Arabica coffee beans are dried at 40°C to preserve the integrity of the inner cells, which are still full of cellular substances. Cell rupture was detected when dried at 60°C, lipids fused to form huge droplets, and some of the protoplasms were seeped out and “crystallized.” This can make the coffee surface “impermeable to moisture” outside the grain cell, causing storage instability (ScienceDirect).

Coffee’s temperature can quickly climb during dry processing, especially if they are left to dry in the sun in warmer climes or are not raked as frequently as they should be.

Several documents explain luminescence in coffee as a result of fermentation during processing. Gibson and Butty, for example, noted in 1975, “This phenomenon is believed to be attributable to changes in Physical and cytochemical alterations in coffee bean tissue,” in their research of the use of fluorescence in green coffee classification. Over-fermented coffee causes physical cellular harm.”

When exposed to UV light, some faults that are difficult to notice with the human eye, such as seeds damaged by molds or bacteria (Streptococcus strains), glow. This characteristic can be used to classify “stinkier” beans (those with sour kernels or those that have been over-fermented), as previously mentioned (Espresso Coffee, p.107-108).

Over-fermented seeds glow white or bluish-white under UV light, indicating a higher concentration of free caffeic acid than healthy seeds. It’s worth noting that caffeic acid is a precursor of ferulic acid, which is very luminous (Espresso Coffee p.130).

Microbial infection can also produce the presence of Scopoletin, one of the luminous coffee components (described above) that is naturally present in green coffee. Scopoletin accumulates when seed tissues are dried, and postharvest oxidative stress occurs, especially at mechanical injury sites (R.J. Clarke, Coffee: Physiology, p.23). As a result, coffee should be processed as soon as possible after harvesting to avoid mechanical damage to the fruit tissue.

Final. While simple to notice under UV light, seed luminescence is physicochemically complex, and whatever the source, it all stems from over-fermentation and incorrect drying during processing. This isn’t conclusive research, but you can deduce details that help improve grain quality by compiling a detailed history of how coffee is handled, processed, dried, preserved, milled, transported, and stored.

We can see how crucial it is to use UV lamps to lower the percentage of faulty coffee to attain superior quality (and at a better price). However, the only way to make this information genuinely valuable is to share your green coffee analysis expertise and procedures with producers and growers so they can spot any problems right away.

Be aware that many individuals lack the financial means to purchase modern optical sorting equipment; our goal is to improve access to instructional materials and technology that can enhance the quality of coffee and the lives of those who create it.

Because a UV lamp is less expensive than a roaster, the percentage of seeds lost due to UV grading may not be significant. However, even with a lot of workforce and money, it’s still impossible to eliminate the faults apparent with UV lamps at the production level.

Even though it took a lot of effort to get to the end of this article, you should only use the results of your UV grading to plan your roasts; provide feedback to manufacturers, and help the industry develop this newly discovered and relatively new technique by sharing your findings. We don’t understand it well enough to apply it to coffee.