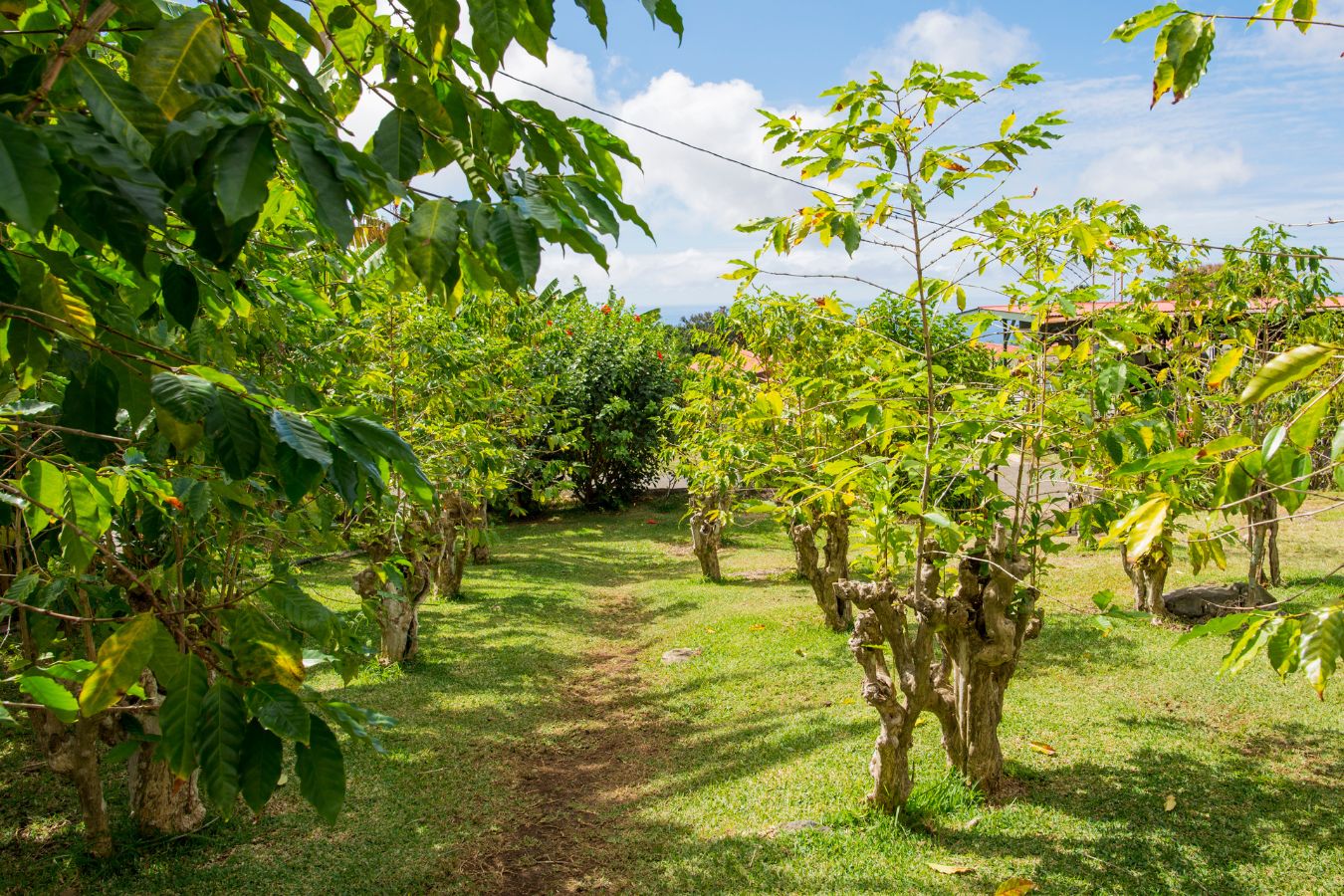 What is F1 hybrid coffee? In the last few years, F1 coffee or F1 cultivars have been a hot topic if you are interested in coffee’s history, varieties, species, and future. So what is F1 hybrid coffee? Why is F1 important, and what are the problems in F1 breeding and development? Hopefully, this article can answer a few questions on this endless topic.

F1 hybrid (or filial one hybrid) is the first generation obtained from the cross between two essential parent species. The F1 seed was created to produce a new era with the desired trait from the parent plant. F1 hybrids are different from pure varieties (Open-pollinated or OP) – OP is a naturally pollinated variety, the result of selection (mostly natural selection) over many years.

OP is suitable for certain climates and soils. If the OP plants are internally pollinated, the next generation will keep many of the original traits reasonably stable. Meanwhile, the children of F1 (generation F2, F3 later) no longer retain the sound characteristics of F1 (We will explain later).

F1 is different from GMO food. A GMO is an organism whose DNA has been altered in an “unnatural” way, usually by human recombination of genes from other species of the same or different family. When you cross two coffee varieties by artificial pollination, the next generation is F1. But when you see corn resistant to pests because the gene is recombined with the bacterium Bacillus thuringiensis, this is GMO corn.

Why is F1 important?

With outstanding characteristics in yield, drought tolerance, pest tolerance, and sometimes quality, F1 seeds are the preferred choice in agricultural cultivation. When going to the supermarket to buy tomatoes, customers want to buy tomatoes that are uniform in color, shape, and taste.

These properties are usually only available from F1 seeds. Each fruit can have a different color, flavor, and shape with OP-seed tomatoes. F1 was born to serve the enjoyment and shopping needs of the majority.

What about coffee? As mentioned in the article about Robusta, Arabica coffee has 44 chromosomes and can self-pollinate, while Robusta has 22 chromosomes and must cross-pollinate to grow. Later generations of Arabica are stable, but pest tolerance and product quality will gradually decrease over time.

New planting of Arabica after 15-20 years is necessary. Still, due to the self-pollinating nature of Arabica and due to the history of Arabica development globally, Arabica seeds do not have high resistance, especially in variable circumstances. Climate and pests are increasingly complex today.

In addition to returning to Arabica’s roots to find the original varieties in Ethiopia, crossbreeding and planting F1 seeds are the two most popular ways of cultivating Arabica today.

What is F1 hybrid coffee?

The F1 hybrid coffee is the first generation obtained from crossing two parent species. If F1 is simply a hybrid, how does the F1 coffee plant differ from other coffee plants primarily hybrids?

Pacas County from the Pacas family farm in El Salvador is an example. After being discovered in 1949, this dwarf Bourbon variety was selectively bred through the generations, and over the years, the purebred Pacas seed was introduced widely under the name Pacas.

Usually, after having hybrids, research institutes need a lot of time to create new stable varieties. The most traditional and safest way of making tough breeds is backcross. For example, we cross A x B into F1, which has many characteristics of both A and B. The seed from the F1 generation will be struck with B (backcross) to produce F2.

According to Mendelian laws of heredity, the F2 age will have only a certain number of seeds with the characteristic of A; the rest will have unwanted recessive gene expression. We must select F2 sources with good features from mother plant A to continue crossing with plant B. This process needs to be repeated over many generations. It is not until the F5 age that the coffee beans have stable characteristics in coffee breeding. That’s how the Castillo breed was born. This is how to breed new varieties.

The backcross is safe but very time-consuming: it took 20-25 years to create the F5. In the context of climate change and pests and diseases, especially rust and many types of bacteria with the ability to grow/change quickly, 20-25 years to create new varieties takes too long, and it is unable to meet the demand for new planting and global consumption of Arabica.

That’s why F1 came about. With good characteristics from the parent plant, F1 hybrid coffee usually has high resistance and tolerance to drought, high yield but still similar taste. However, the problem with F1 is that in later generations (F2 onwards), the sound characteristics will gradually degenerate and disappear.

In other words, farmers should not plant seeds from F1 plants. Therefore, whenever you want to replace the old variety, the grower needs to buy a new one. The price of F1 sources is relatively high and is a significant investment, not immediately profitable. Investing in F1 beans continuously is not possible / not recommended, especially when the coffee market is volatile and prices fluctuate wildly.

Ruiru 11, like F1 from the 80s, is a prime example. The quality of Ruiru 11 seeds is quite good. But when we plant the next generation of Ruiru, the sources are uneven and unstable, have tall and low trees, and have reduced resistance.

Of course, the technology for growing F1 plants is there, but it takes even more effort and money than buying F1 seeds. This article is not enough to talk about cultivation using biotechnology, but in general, when technology + laboratory + time is required, such culture is overwhelming for most coffee growers. Up to now, Starmaya is the only F1 coffee variety that can be propagated by growing coffee beans instead of clonal propagation or artificial pollination. (I’ll cover that later in the next section).

Ruiru 11: After the Coffee berry disease hit Kenya in 1968, the Coffee Research Institute in Ruiru, Kenya, developed a variety of Ruiru 11 resistant to CBD. It took about 15 years; Ruiru 11 was introduced in 1985. Ruiru 11’s father tree is a cross between Rume Sudan, Timor Hybrid and K7 (CBD tolerant), N39, SL28, SL34, and Bourbon (for good taste). The mother plant is the dwarf variety Catimor, resistant to rust and CBD.

Ruiru 11 is also a hybrid cultivar due to its complex genome. The seeds from the Ruiru 11 tree are a mess ^^’ Ruiru 11 is no longer as prevalent in Kenya and Tanzania as in the past. Instead, it is Batian – Ruiru 11’s F5 generation.

H1 (Centroamericano): F1 hybrid between Sarchimor T5296 (rust resistant) and Rume Sudan. H1 has good rust resistance, high yield (~30% higher than Caturra or Catuai), good quality, and can grow in harsh conditions. H1 was developed under the leadership of CIRAD, PROMECAFE, and CATIE.

H16 (Mundo Maya): F1 hybrid between T5296 (rust resistant) and ET01 (Ethiopian cultivar). H16 is highly productive in good soil conditions and when grown in an agroforestry/shade-grown system. H16 has high quality from 1300m and up.

Coffee growers usually have three options to plant new varieties above: buy new F1 seeds, propagate asexually by cuttings, or artificially pollinate. These three methods are both expensive and time-consuming. That’s why CIRAD has developed a new variety, Starmaya: a coffee variety that can propagate F1 using male sterile plants.

Starmaya: Why is Starmaya special? As mentioned, there are two ways to breed F1s. Method 1: Asexual propagation by cuttings or somatic embryo culture — takes a lot of time and effort. Method 2: Manual pollination requires the grower to remove the pistil before carrying pollen from another plant to pollinate flowers that have lost their pistil (lost pistil = male infertility). This method is very time-consuming and cannot be done on a large scale.

Using male infertility plants is the optimal solution. To create Starmaya, CIRAD crossed the mother plant with a sterile male plant (=no pollen). The use of male sterile plants in F1 production is not new; science has produced many generations of F1s studying rice, wheat, or sorghum. However, Starmaya is the first F1 variety to use this method in coffee.

CIRAD uses the natural mutant CIR-SM01 (derived from Ethiopian Arabica at CATIE Institute). This naturally infertile variety was developed in a Nicaraguan laboratory by culturing somatic embryos before being sent to the nursery. After determining that the phenotype of this mutant was stable over time and unaffected by soil and climate, the male clone was crossed with Marsellesa®.

Marsellesa® (with the symbol ® because it is a registered variety): Developed by ECOM-CIRAD in Nicaragua. This hybrid is between Timor Hybrid 832/2 and Villa Sarchi CIFC 971/10. Marsellesa® is highly resistant to rust and too harsh conditions.

Starmaya has about 30% higher yield than Marsellesa® with good taste and high resistance. In addition, since one of the F1-producing plants is male infertile, the offspring of F1 always have dominant genes from both parents. Instead of hand pollination, Starmaya can be pollinated naturally (by wind or bees). The next generation of Starmaya is always a hybrid, instead of a mix of hybrid seeds, seeds with only the characteristics of the mother plant, or sources with only the parts of the father plant.

(We understand very well writing like this is not easy to know at all ^^’ you can read about Mendelian’s laws of heredity and biology textbooks to understand better xD or visit 96B for the writer to draw a diagram to see. Let’s be intuitive :P)

With these outstanding characteristics, Starmaya is a topic of great interest if you learn about coffee varieties in general and F1 coffee in particular. The excellent taste and easy reproduction and replanting of this F1 variety is also the most attractive point for farmers.

In Vietnam, the BREEDCAFS project has started to introduce F1 varieties since 2017. In Son La and Dien Bien, CIRAD, through BREEDCAFS, introduced F1 types, such as Starmaya, H1, and H16, developed from the beginning of 2000. These varieties have been planted in Central America with good results. The cupping results of the first crop at the end of 2020 are pretty impressive. These varieties are also well suited to altitudes of 1300m or more when grown in the shade and agroforestry systems.

When the old Catimor variety is getting weaker and weaker (both in taste and resistance), F1 with good quality, pest resistance, and adaptation to climate change is the correct answer. Not only that, but planting wide F1 varieties also helps farmers diversify crops, bringing high yields, good quality, and consequently high prices.

In addition, the problem of buying new F1 seeds is also partly solved with F1 varieties like Starmaya. Propagation becomes a lot easier and cheaper than growing conventional F1 seeds. With a yield of up to half a million seeds per hectare and natural pollination ability, Starmaya seeds cost half as much as other Arabica F1 hybrid seeds. The only problem is that 10% of Starmaya seedlings will not have the same phenotype as the parents because the CIR-MS01 variety has an unstable gene.

Summary of the BREEDCAFS project in Son La and Dien Bien shows that Marsellesa and F1 varieties have better growth, flavor, and yield than the old Catimor variety grown in the Northwest. Son La plans to re-cultivate 8000ha of coffee, with 500ha for specialty coffee. Dien Bien also said it would spend 300ha on specialty coffee.

If you are interested in the future of Vietnamese coffee, the F1 hybrid is the topic you need to know. We hope this article has helped you understand this complex but fascinating topic.