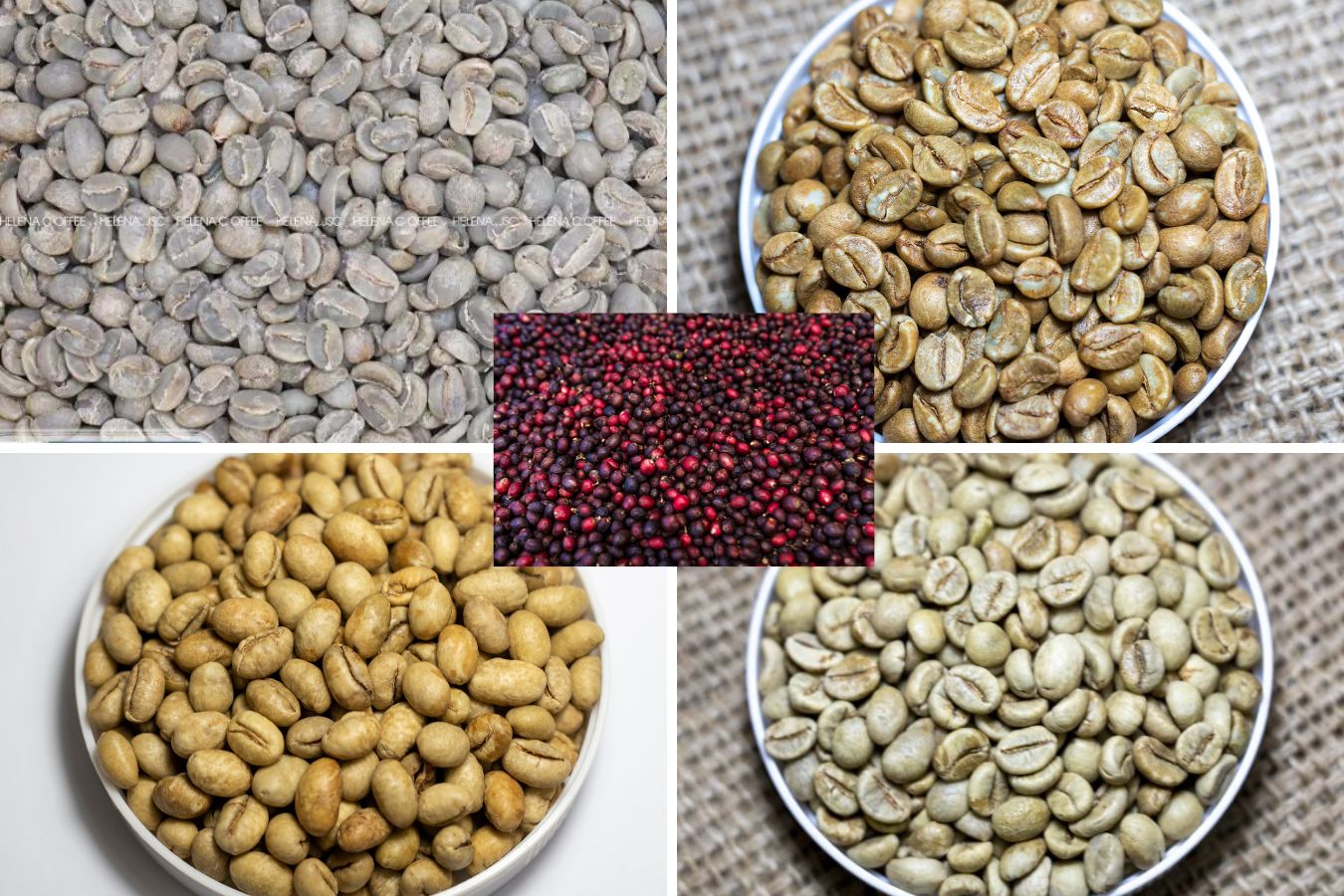 The top Vietnamese Beans: Like many other countries in the world, coffee is a very popular drink in Vietnam. Not only that, but our country is also the place with the largest coffee export volume in the world, ranking second after Brazil. According to research on coffee, Vietnam’s coffee export market has increased steadily in recent years, accounting for about 15% of the total export turnover of agricultural products.

Top five types of Vietnamese coffee beans. Helena Coffee, who shares your enthusiasm for coffee, will accompany you on your journey to discover and experience all of Vietnam’s and the world’s most famous coffees. Even if it’s only via words, I hope that coffee lovers will sense and learn more about different sorts of coffee.

Arabica coffee is referred to as “coffee tea” in Vietnamese. Popular Arabica coffee varieties include Catimor, Moka, Typica, and Bourbon. There are two varieties of coffee growing in our country: Moka coffee and Catimor coffee.

Moka has a pleasant scent but a bland flavor. Catimor has a strong odor and a bitter and sour taste. The sour flavor comes from the coffee cherries being fermented after harvesting, giving them a slightly tart flavor.

Harvesting takes about 3-4 years after planting. Coffee and tea are farmed in Vietnam’s Da Lat, Lam Dong, Son La, Dien Bien, Thuan Chau, and Muong Ang provinces. This is an area where high-yielding coffee is farmed to the highest standards.

Features of Coffee beans are used in about 39% of coffee products. Brazil, Indonesia, Malaysia, and VN are among the coffee-exporting countries, with VN being the top exporter of coffee beans.

The Robusta coffee tree prefers to exist in the tropical, with a suitable planting altitude of fewer than 1000 meters, a recommended temperature of 26-29 degrees Celsius, and a rainfall of more than 1000mm. Coffee trees require more sunlight than other trees.

Because Robusta is dried rather than fermented, the taste is harsh, and the aroma is robust, making it a popular choice among males.

Jackfruit coffee beans are not red-brown like typical coffee beans but rather a gleaming yellow. When roasted, it emits a subtle aroma and a distinct sour flavor, making this coffee ideal for ladies and Europeans.

Because European-style instant coffees frequently contain a large proportion of jackfruit coffee, they have a distinctive bad taste.

When roasted and ground, jackfruit coffee beans are frequently used with vanilla coffee and tea to create a delectable new flavor.

Culi coffee comes in Arabica vs Robusta kinds. Unlike regular coffee cherries, which must have two seeds, culi coffee is a mutant coffee bean variety that only has one bean. Cult coffee has a higher caffeine level than other coffee varietals due to this unique property.

Culi coffee has a distinct flavor: the water is dark, bitter, and fragrant, making it a favorite among coffee lovers.

Culi coffee is uncommon, contributing to approximately 2-4 percent of the total harvest. As a result, it is regarded as a premium coffee by coffee connoisseurs.

The Arabica Moka species coffee is grown in Da Lat, Lam Dong. In comparison to Arabica coffee, Moka is a complex plant to produce, vulnerable to pests and illnesses, and necessitates a great deal of attention. As a result, the price of coffee is more than other types of coffee, and it is pretty rare; therefore, not many people appreciate the taste.

Moka coffee is known as the queen of the coffee kingdom. Among the many exquisite coffees, the flavor of Moka coffee is particularly passionate and nostalgic. A slightly bitter taste, a fatty taste, and a sour taste travel throughout the mouth cavity and down the throat when you drink.

Our products are now exported and consumed in various countries and areas across the world, including China, Taiwan, Thailand, Singapore, Ukraine, and the United States. Check product quality in VN.

Vietnam was the major coffee grower in Southeast Asia and the world’s second-largest coffee producer by the late 1990s. However, Robusta beans have traditionally been the mainstay of output.

The fertile volcanic mountain soil of Vietnam’s Central Highlands is home to the majority of the country’s coffee output. Arabica beans are traditionally grown in Lam Dong, but Robusta beans are grown primarily in Dak Lak and Dak Nong.

Surprisingly, Vietnam provides the optimal geographic and climate characteristics for Arabica bean growing. Vietnam is aggressively working to improve the quality of its coffee and hopes to boost the cultivation of Arabica beans, according to the International Coffee Organization.

In Vietnam, there is a brief history of coffee

During the French colonial period, coffee was first introduced to Vietnam in 1857. It was originally grown for the French who lived in Vietnam, but soon after, the native populace began to enjoy coffee as well.

Coffee output continued to rise in the following years, with the largest growing zone being the Central Highlands region surrounding Buôn Ma Thuot.

Despite the fact that the area of Buôn Ma Thuot witnessed minimal action during the American and Vietnam War, its placement in the heart of the country, sandwiched between the North and the South, caused many people to flee.

Following the war, production increased, and by the late 1990s, the country had risen to second place among the world’s top coffee producers. Coffee exports are currently second only to rice in importance in the Vietnamese economy.

The Vietnamese Coffee Industry and the Issues Facing Farmers

Although Vietnam produces a large volume of coffee each year, typically topping one million tons, the robusta bean accounts for the vast majority of it. Robusta beans account for 95 percent or more of the annual harvest, making Vietnam the world’s largest producer.

Robusta plants are easier to grow, yield more beans, and are more tolerant of less ideal growth conditions than the more delicate arabica bean, although they are not as popular.

Efforts are now being made to improve arabica output, but robusta still reigns supreme in Vietnam for the time being.

Farmers in Vietnam suffer similar difficulties. Aside from the concern of climate change, which is already causing problems for growers around the world, many of Vietnam’s coffee trees are elderly and nearing the end of their productive lives.

This means that a systematic replanting program will be required to maintain the industry viable in the country.

Coffee may have been introduced by the French to their former colony, but the Vietnamese seized it and made it their own.

In Hanoi or Ho Chi Minh City (or Saigon, as the Vietnamese still call it), you won’t have to travel far to discover a coffee shop full of pleasant locals enjoying a cup.

There are two things you must do before leaving the nation if you visit. One is the now-famous ph, a delectable bowl of beef noodle soup that serves as the country’s national cuisine. The second is Vietnamese coffee, which is known as cà phê in Vietnamese.

A thin, peculiar drip coffee filter, is used to make Vietnamese coffee. Because the beans used are often bitter robusta, the coffee is frequently sweetened with condensed milk, which retains significantly better in the hot tropical climate than fresh milk.

The result is a thick, sweet drink that may be served hot or over ice, which is understandable given the hot weather in Vietnam.