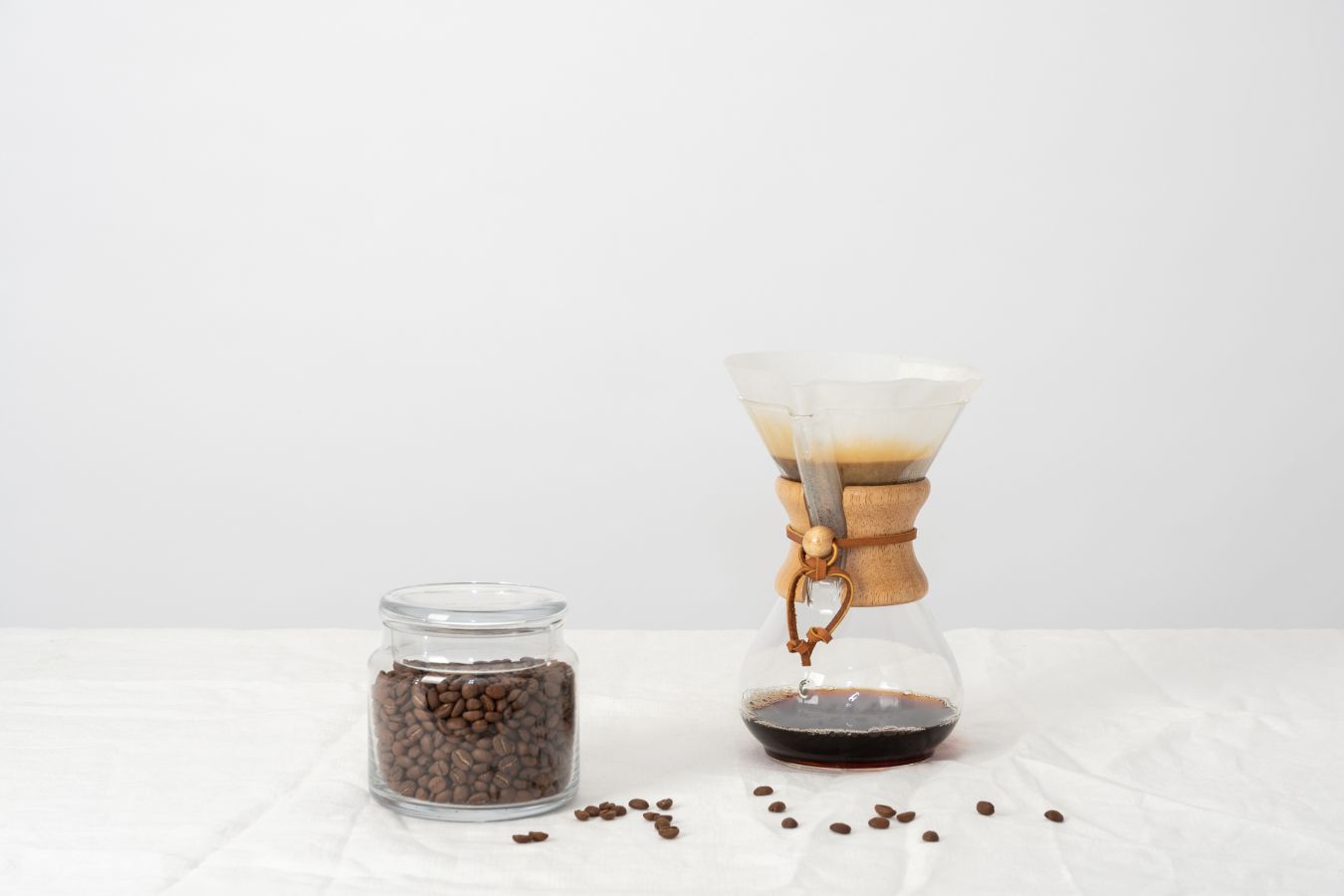 The Iconic Status The Era of Chemex in Brewing Coffee: The Chemex flask, with its only-one-shape design, comes with wooden, leather, and paper details .. although it carries the direction of each third wave, it was developed by German chemist – Peter Schlumbohm and Invented in 1941.

With a design shortcut and minimalism, today, the casual Chemex has become an iconic status of the era and is present in the permanent design collections of the MOMA museum, the Brooklyn Museum, and many more various museum listings.

Invented by a chemist in 1941, the Chemex coffee pot is simple in appearance and use, but its unique technology is designed to make the best possible cup of coffee – foodal.com.

Although the Chemex pot has a “private plot” design, it is closer to a simple glass pot than a coffee maker. For those who belong to the biochemistry industry and have stepped out of the lab, the cup handblown Chemex kit is a familiar image – a waisted glass triangle flask and a natural filter paper; the only difference is a piece of paper. Wood paneling with leather straps looks more eye-catching.

This is because the father of the Chemex flask was a German chemist – Mr. Peter Schlumbohm. Schlumbohm’s patent number 2,414,901 for a Filtering Device was filed on April 13, 1939, marking the birth of an icon in the coffee industry. The prototype was much more complex than today’s standard version of the Chemex flask.

During his career, he developed more than 300 patents, from cocktail shakers to automobiles. His design philosophy is to make everyday objects more versatile, fun, and easy to use. Maybe he did it with his chemistry lab equipment.

When designing the first Chemex pot, Schlumbohm wanted to make perfect coffee simply and look great. In addition, as a chemist, he studies and understands the nature behind the extraction of flavor and caffeine from coffee beans.

This knowledge led him to create his own CHEMEX filter paper for his glass vessels. From a business perspective, this is an initiative with economic value, as users have to buy additional exclusive filter paper to use with Chemex bottles.

Of course, there must be a reason for users to buy Chemex’s proprietary filter paper. First, the piece is stiffer to keep its shape without sliding down the pitcher when pouring and strong enough to take it out of the brewer without tearing or disintegrating; this thick paper retains most of the sediment. Other filters miss (such as French Press).

However, the most important reason is that this filter paper is thicker than standard filter paper for other coffee drippers (like the V60, for example), so it removes most of the oils in the coffee, making the coffee stronger. Mix with different flavors. In addition, the thickness of the Chemex filter paper can help remove cafestol, a cholesterol-containing compound found in coffee oil.

From “popular” Chemex vases to being an iconic status of the era.

The prototype of the Chemex pot was displayed at the 1939 New York World’s Fair, claiming to be the cheapest and simplest coffee maker ever invented. Schlumbohm sees this as the financial independence he has been looking for since graduating more than a decade ago. Indeed, an investor has offered to provide enough funds to get the prototype into production.

But with the requirement to control interests in the company. Schlumbohm refused the above sponsorship, which caused him financial difficulties. However, the patent of the iconic Chemex jar was so attractive that he sold half of the $5,000 capital within a week to apply for a license.

Chemex Company was founded in 1939 in New York; Schlobohm is on the board of directors. At that time, he was faced with the problem of finding a manufacturer willing to handle a large number of orders in the increasingly complex environment of World War II.

However, the advantage of this period is that the Bauhaus design style originating in Germany has spread to the whole world. The simplicity of Chemex’s design, materials, and manufacturing processes was an instant hit and became a pure representation of modern art – a design philosophy of simplicity. Which is collectively known as the “styling function.”

In 1942 Chemex appeared on the cover of the Museum of Modern Art Magazine “Useful War Supplies.”

Over the past decades, the classic cup scheme has become more than just a Pour-Over instrument but has become an iconic status of the era of the coffee industry; glass handles Chemex pots can be found in prestigious museums, from the permanent collection at Brooklyn Museum, New York Museum of Modern Art, to Corning Museum of Glass, MOMA…

In 1956, the Illinois Institute of Technology selected the Chemex coffee pot as one of the best-designed products of its time tips.