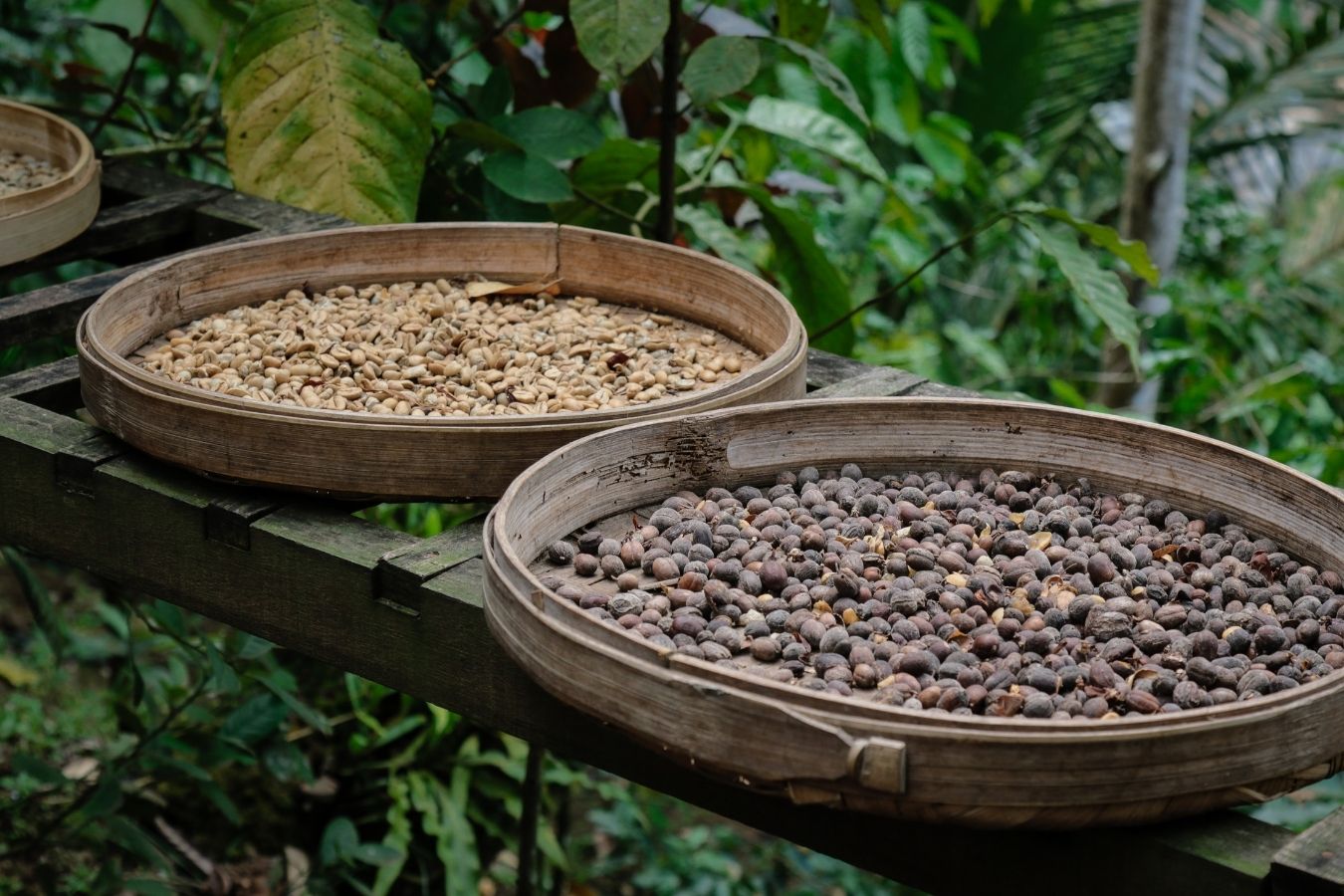 Coffee Production In Indonesia: In the worldwide market, we rarely talk about Indonesian coffee, or rather, most of Indonesia’s specialty coffees are referred to by the names of a few islands, such as Java, Sumatra, or Sulawesi… in a country with over 900 islands.

This island country has permanent residents. “Java” has become synonymous with “Coffee” among many Western customers. This comes from the 17th century, when the Dutch East India Company (VOC) controlled most of the world’s coffee supply, with much of it coming from this small island. This is just one illustration of coffee’s numerous economic, political, cultural, and historical effects on Indonesia.

Since 2014, Indonesia has become the world’s fourth-largest coffee producer. Coffee trees were produced in Indonesia in the late 1600s — under the Dutch empire – to acquire this status, and have played a vital role ever since. key role in the country’s economic and cultural development

Flooding in Batavia killed the first coffee trees. In 1699, the second batch of seedlings was successfully planted, marking the beginning of the development of coffee trees in Indonesia. In 1719, Indonesian coffee was introduced to Europe under “Java coffee. ” This success has a significant impact on global coffee production, not just in Indonesia. Over the years, the names Java and Sumatra have represented excellent-tasting coffee.

Like many other coffee-growing regions, Java and Sumatra have a rare natural beauty. This scene, however, contrasts sharply with “how the colonists were treated.” The indigenous peoples suffered greatly due to the Dutch plantations at the period.

“Each indigenous family had to produce 650 coffee trees, harvest and process them for the Dutch government, and be paid a stipend. At a reasonable price,” Francis Thumber wrote in Coffee: Plantation to Cup, published in 1881. In this way, the Dutch established the toughest despotism over the colonists.

The arrival of Indonesian coffee was commemorated in 1711 when the Dutch East India Company transported the first consignment from Java to Europe. Many exporters profited handsomely from repeated coffee crops, but colonists fared worse.

The novel “Max Havelaar: The Coffee Auctions of the Dutch Trading Company” (or Dutch trading company coffee auctions) was released in 1960, exposing the system’s excesses and injustices. The colonial system of the Netherlands. The novel revolutionized the labor system, inspiring the creation of the first Fair Trade brand, Max Havelaar.

An overview of the coffee business in Indonesia

According to Indonesia Investments, the country now has roughly 1.24 million hectares of coffee plantations, with 933 hectares of Robusta farms and 307 hectares of Arabica farms.

More than 90% of these farms are small, ranging from 1-2 hectares in size. In contrast to competitors like Vietnam, Brazil, and Indonesia, which do not have substantial coffee farms and have numerous output and quality consistency challenges, competing in the worldwide market is challenging Economic. Cafeimports compiled the following information in 2017:

Production at a larger scale:

One hectare is the average size of a farm.
According to ICO, Indonesia’s crop year 2019/20 output was 11,433 bags (60 kg), with 4,806 bags consumed domestically.
Coffee growing in Indonesia includes the following activities:

The majority are processed using a traditional method known as Giling Basah, similar to wet processing.

Until the 1870s, when coffee trees throughout the region were ravaged by rust, Indonesia’s coffee crop was virtually entirely Arabica. Farmers eventually replaced Arabica with Robusta varieties, and today, despite Indonesia’s status as the world’s fourth-largest coffee producer after Brazil, Colombia, and Vietnam, only around 25% of production is Arabica.

Coffee production and processing in Indonesia

Unlike other South American countries (such as Brazil, Colombia, and Costa Rica), which produce predominantly high-quality Arabica beans, Indonesia produces mostly low-quality Robusta beans. On the other hand, Indonesian Arabica types have lower acidity and a more muscular body, making them perfect for blending with more acidic Central American and East African coffees.

The majority of Indonesian coffee is now wet-processed. However, in places like Sulawesi and Sumatra, the ‘Giling Basah’ (a traditional method almost unique in the coffee industry) processing technique is still utilized.

The farmer grinds the pods in a manual grinder known as a “Luwak” after harvesting in this manner. The coffee beans, which are still covered in mucilage, will be soaked in water, dried, and sent to the factory to be husked (moisture is still around 35 per cent). Finally, they are stretched out in the drying yard for the following three days to keep the humidity below 12%.

Indonesia has a lot to offer in the specialty coffee industry, with distinct and diverse flavor characteristics based on area and processing. Sumatra and Java are the most well-known of these almost 1,000 islands; nevertheless, the other islands of Sulawesi, Flores, and Bali also produce excellent coffee.

Sumatra Coffee – For many years, coffee from the Indonesian archipelago’s largest island was known as ‘Mandheling’ or ‘Lintong.’ Where ‘Mandheling’ is the name of a tiny village south of Lake Toba, and ‘Lintong’ is the name of a Mandal people who originated in North Sumatra. Smallholders grow most of Sumatra’s coffee (average of two hectares or less instead of cooperatives).

These enormous crops are located at around 1,370 meters on the Ijen volcanic plateau. This is where coffee was initially grown in Indonesia and exported worldwide by Dutch colonists well over a century ago, before being revived by the Indonesian government in the late 1950s after independence.

Sulawesi Island – Smallholders produce most of Sulawesi’s coffee, accounting for nearly all of the island’s output. Although some coffees are wet-processed, the Giling Basah method is still used for the majority.

Indonesia is known for its specialty coffees and is a significant contributor to global coffee production. Kopi Luwak coffee, Toraja coffee, Aceh coffee, and Mandailing coffee are the most well-known.

Luwak coffee is the most well-known and has the most distinctive flavor. Indonesia’s wild weasels eat only ripe coffee berries and deposit coffee beans in their excrement, similar to Vietnam’s Weasel coffee. This coffee has a deeper flavor due to the unique fermentation that occurs in the thick skin of the mink with complex animal enzymes.

However, it should be noted that natural Luwak coffee (as well as farmed mink) is exceptionally scarce, resulting in a very high market price for Kopi Luwak, which is always “sold out.”

While the specialty coffee market in Indonesia has been gradually growing, it is not without its own set of obstacles, such as:

Smallholder farmers with an average farm size of 1 hectare or less grow most of Indonesia’s coffee.

On this island nation, ten main languages are spoken, but there are 748 other local languages. To maintain coffee production and quality, stakeholders must communicate in various “mother tongue” languages.
With 922 permanently populated islands, traffic is a significant issue for Indonesian coffee, as moving and delivering commodities through a chain of islands is a logistical challenge.
Finally, and maybe most bitterly, there is a gender imbalance among coffee growers. Some rural women in Java get as little as $1.75 a day picking coffee (less than the legal minimum wage) (less than the legal minimum wage). Partly because coffee farmers, on the other hand, do not gain much from the supply chain simply because they are women.